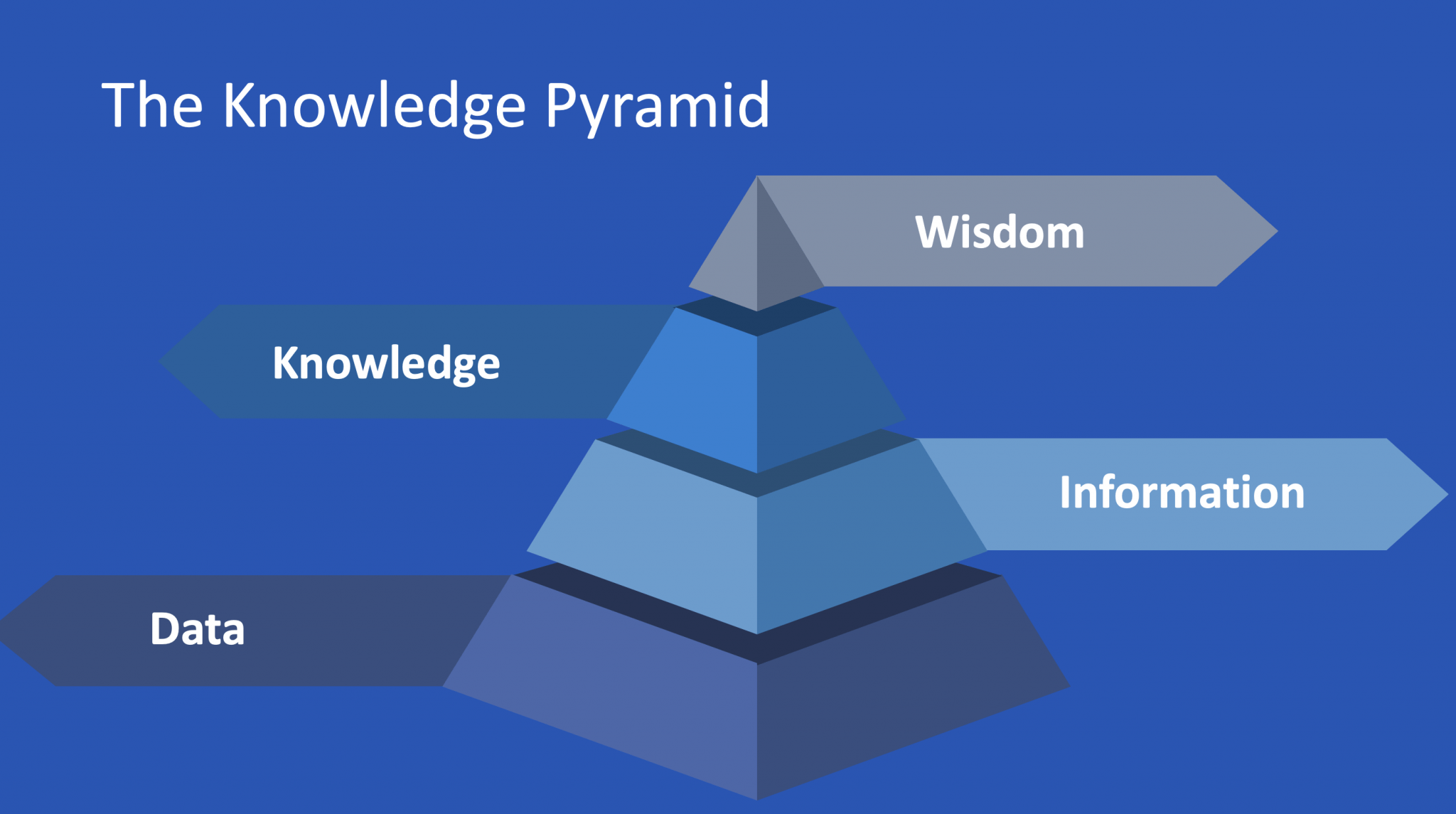 The knowledge pyramid is also known as the DIKW pyramid, explains the information hierarchy from data to wisdom. It can also be used to understand the difference in perspectives between AI and IT.

The concept called the knowledge pyramid can help us gain perspective on the difference between IT and AI.

The knowledge pyramid does not, in principle, have anything to do with technology. The concept explains levels of enriched knowledge. Specifically, the pyramid tells us that knowledge can be enriched on four different levels. As a through example that can explain the four levels, we use a weather station. Let’s say you’ve set up a digital weather station on your roof. It measures temperature, humidity, air pressure, wind direction and wind speed. You can see the weather information on screen in your house, and perhaps also as an app on your Smartphone.

Your weather station probably works with all of the four levels of knowledge in the knowledge pyramid.

The lower level of the pyramid is called data. Data is unstructured and unprocessed information. In our example, it is the particular weather measurements that the weather station records. So data is the result of the measurements in raw form. All these measurements are numbers. If you put them in a spreadsheet, you would just get rows of numbers.

If you showed your weather measurement data to other people without telling them where they came from, then nobody would be able to use them for anything. For anyone but you, they would just be numbers in a spreadsheet. Maybe some could guess that they were dealing with temperature or wind. But that would be guesswork.

That is the essential characteristic of data in its raw form. It is (unstructured) data which in itself has no value. Because looking at data alone does not make us understand what it is used for. This is not possible for us, because the context of the data you are looking at is not known to you.

That’s why we have information. For now, there is an understanding level that gives data value. Now we put units on our weather data. So our spreadsheet now consists of data in a structure. For example, the information is divided into time intervals. The temperature measurements are shown with Celsius as the unit; we show the wind direction as degrees, etc.

What we do now is to create structure in our data, and thus we enrich it so that it is no longer data. It’s information. In our new spreadsheet, other people will now have a realistic chance to understand what the numbers in the spreadsheet mean.

The preconditions for extracting knowledge from the spreadsheet are that you know what Celsius and degrees are. People know this because they have learned it. When you look at numbers with these units attached, you decide that it is probably weather numbers because you have knowledge and learning that makes it possible to see a logical link from the numbers in the spreadsheet to weather information. What you do, it is professionally called deductive learning.

In doing so, we move up to the third level of the knowledge pyramid. Here we find knowledge. By looking at our numbers in the spreadsheet, we know that it is weather observations that we are looking at. It is an understanding that comes from a combination of the information we see in the spreadsheet and our knowledge. We know, for example, that the number 21 Celsius degrees mean it is warm enough to wear a t-shirt if you need to get out of the house.

The next – and last – level is wisdom. Now we start acting on our knowledge. If we see a rapid drop in air pressure and changes in wind direction, then we know that there is a high risk of rain. So we go out and remove the cushions on the patio furniture. Such actions are guided by a reflection of what we can deduct from the weather information. So we are doing something because we are dealing with the consequences of the knowledge we get from our spreadsheets.

Thus the lowest level of the pyramid of knowledge is data, and the highest is wisdom. The definitions of the four levels are:

The key to knowledge is that you use it as a starting point for making decisions. But there is a huge difference between a decision-making process based on information or knowledge. Especially when it comes to tech solutions.

Decisions that are based on information can only be mechanical, which means that an information based system reacts to data. If a given situation occurs, then the system does something. Many of you know this as an “if-then-else” scenario. Such as “If the customer is about to leave our website, then show him a pop-up message. If he is not, don’t show the message.

However, the system can only do what it is programmed to do. Hence the mechanical part of it. All decisions are made by rules that are coded into the system. The system does only actions that are defined by rules and the code the specify the intentions of the rules.

This is not the case if decisions are made on the basis of knowledge. Then you relate to what you see and decide on the best outcome. In the weather station example, we interpreted what we saw as weather data and took actions from on it, such as wearing a T-shirt and removing the garden cushions.

So, the starting point for making decisions is rooted in different places in the knowledge pyramid. IT makes decisions based on the information layer, and AI desitions originate from the knowledge layer. The difference between the two approaches means that the question “Can I wear a t-shirt today” would be answered with entirely different logics. Both technologies use the same data and thus have the same underlying conditions. But the way the two systems reach an answer to the question could not be more different.

If an IT system were to answer that question, they would it would look at its data. What is the temperature? 21 degrees. Is there a rule that describes the appropriate intervals for t-shit whining. Yes, it is there is. There is a software code that says T-shirts are ok between 20 and 29 degrees. So the IT system would respond:

Yes, you could wear a T-shirt today.

The reasoning in AI is entirely different. It would seek to answer the question by looking at the characteristics that apply when people wear T-shirts. From that, you would then get the answer:

No, you shouldn’t wear a T-shit today. A windbreaker is a better choice.

You wouldn’t know why it would answer that a windbreaker would be better. But in this made-up example, we can say that it’s because your AI looks for the most robust patterns that explain why people wear T-shirts.

Maybe it is the temperature. But it could be that it was also very windy today and that the system has learned (via observations of people’s actions) that the windbreakers beat T-shirts in such weather conditions.

The devil’s advocate would say that it’s just a matter of making the quality and amount of rules in an IT system good enough. Then they would be able to get to the same level of response as our AI did here. And that’s right; you can. If the world you look in to can be described mathematically, and you know all the possible outcomes. The problem is that it is rarely the case, and then you can’t make the rules that are the prerequisite for your IT to solve the task well enough.

The requirements and conditions for using either AI or IT will become a recurring discussion as AI-based solutions gain momentum. You now know the basic premise of choosing between the two, namely whether the starting point should be an information-based system or a knowledge-based system.